At Berkshire Sweet Gold Maple Farm we are both agroforestry harvesters & processors of a heritage food.  A bottle of Berkshire Sweet Gold  samples a single Spring day's 15 gallon barrel of pure maple syrup made in about forty-five minutes from sap collected from 4,500 Sugar Maple and Red Maple trees in a highland forest.   There are three main steps to crafting maple flavors described below.  One happens inside the trees, one happens in the forest and one in the sugarhouse.

What happens in a maple forest harvest?

In the trees...
...as late winter temperatures climb, starches stored in maple roots convert to sugars to flow in sap to nourish spring budding.  A unique property of North American maple trees makes it possible to collect this fluid which is often around 2% minerals and sugars: air cells present in the hardwood (xylem ) surround sap-filled tubules.  As these cells freeze,  internal humidity condenses into frost along their cell walls.  This drying air draws in more humidity which also freezes and the result is a  compacting rime of ice, building pressure inside the cell.  This tension, in turn, pressurizes the sap tubules it surrounds (like squeezing a toothpaste tube)!   On a rapidly warming day after such a night time freeze, this pressure combines with the sap column's weight of gravity and cellular osmosis, to exert up to 40psi at the trunk base!  Our tap holes, or any break of a limb, will therefore drip sap.

As this internal pressure draws down to match that of the current air pressure outside the tree, the discharge of sap declines and then stops until it freezes again.   If one could stop right there and harvest/process the sap, the only color and flavor would be delicate Light Ambers.  Inside a tree it is a sterile environment where the tree is moving wild sucrose and minerals to where they are needed.  Plants fashion their energy into carbohydrates which store well in a wet environment.  Carbohydrates are converted to sugar to render them soluble for transportation.

How much of the trees energy do we take?  One formulation considers that maple leaves getting the sunshine they need can average about 1.5 pounds of carbohydrate per square meter of leaf cover over a growing season (about 1 gram per sunlit hour).  If one considers a large field tree may have 2,000 square meters of leaf surface thats 3,630lbs per season!  A tree with 500 square meters would produce 915lbs.  (Platt, The Great American Forest, 1965, pg. 101)  A careful harvester using one or two small 5/16th taps will remove 6-8lbs (dry weight) to craft into 3/4 of a gallon of syrup! 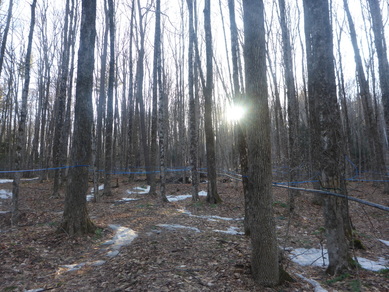 In the forest...
...as daytime and seasonal temperatures rise over the next 6-8 weeks  a wild forest fermentation launches.  Dozens of changing airborne bacteria and yeast strains interact with the sap as it leaves the trees and rapidly travels down steep rocky ledges, across brooks, and through hemlock groves through a network of 20 miles of tubing to enter our syrup house.  This fermentation produces different sugars (some sucrose is broken into glucose and fructose) as shifting wild yeast populations compete and flux, contributing their unique materials like amino acids and proteins to the mash which can shift by the moment.

Forest fermentation accelerates with warming temperatures and passing days.  Different wild yeast have different temperature sensitivities which shifts their mingling populations and unique flavor contributions.  In addition, all yeast work faster as the sap warms up and changes color from crystal clear to opaque and bubbly with whorls of yeast.   These unregulated processes -- along with other natural elements like soil composition, maple tree varietals, and weather patterns -- establish the basic elements of wild forest flavors forming maple's unique variance.  Maple syrup: arguably  the most complex harvest on our planet!

The key is to use just the right amount of heat to maximize flavor production without breaking flavors down through toasting.   Brief heat exposure forms flavors as amino acids made by yeast bond to sugars (called the Maillard reaction).  Prolonged heating would surpass this process with excessive caramelization (oxidation and pyrolysis) alongside increased potential for scorching.   In addition, prolonged cooking means sap coming in from the forest in a different state of fermentation is mixing in the boil with sap from earlier fermentation profiles.  We consider this passive blending to muddy nuanced flavors which can be distinguished by the palate.

At BSG-Farm a 15 gallon barrel fills with syrup in roughly 30 to 45 minutes, while we feed the evaporator no more sap than it can cycle in an hour (about 180 gallons).  In this way, we capture the unique tastes and the natural flavor variance that characterize small batch production:  a Single-Batch from a Single-Crop.

Our "solar powered harvesting" integrates a 10kw PV system with a reverse osmosis machine that removes 60 percent of the water from the sap before it goes into the evaporator.  With this strategy we cut fuel consumption from 5 gallons per gallon of production to 6/10ths of one gallon!  A green carbon footprint that also leaves vast cord wood in our forest where we feel it belongs as habitat and resources to all the creatures we share this ridgeline farm with.

We harvest a crop's natural variance that large, wholesale-driven outfits must sacrifice.  Syrups blended from different time periods, barrels or farms (as in creating a Medium amber by mixing Light and Dark syrups) may be far less smooth and sophisticated in flavor and can develop cloying aftertastes that limit a syrup's versatility.  Our perspective is that over the last fifty years, the public's increasingly narrow association of maple syrup with heavy breakfast foods has occurred in concert with the dominance of wholesale-commodity harvesting and marketing practices like blending. The unique and traditional qualities of each farm’s syrups, each hour’s shifting flavors and thus each color’s many facets, will not survive a blending process.
Heritage  & syrups at your table

Maple syrup is likely the only food in your kitchen harvested from the woods in a centuries-old tradition. Maple harvesting is a 400 year agroforestry practice first learned from Native Americans who harvested in large quantities.  Meats and grains were packed with sugars for both preservation and high energy.  Meats were simmered in nutritive maple sap.  The crop became a first agricultural activity for many early European settlers to the Northeast as they cleared land for other crops.  Maple was an important real estate tool for European businesses urging farmers to colonize New England and produce crops like Merino wool.  Uneasy farmers were reassured that, while clearing wilderness and risking all during that critical first year or two  they could immediately harvest this unusual forest crop and survive!  Historically, and into knowledgeable contemporary times, maple is not considered simply a topping for heavy breakfasts.  Rather, it is a prized, broad-ranging condiment and garnish for meats, vegetables, fruits, breads and drinks and complements many sour and savory spices.  Historically maple offered an important new way to preserve foods as an alternative to salting, drying and fermenting.
Maple syrups came into the colonial and European diet in the mid 1600s at the same time as cane sugar and from the very beginning was a successful competitor.  Having said that, it took many European cultures and colonists some time to figure out how to integrate sweet tastes with their traditional diets rooted in sours, fermentation, and salting.  Native Americans offered colonists guidance which eased this important dietary transition.   During many historical periods up through the Civil War maple sugar outsold cane sugar in the Northeast by preference and volume for household use.  Cane was tariffed from the outset and suffered from abusive labor practices which often continue today in places like the Dominican Republic.
(For more on maple and sugar's histories, see Helen and Scott Nearing, The Maple Sugar Book, Tom Wessels, Reading The Forested Landscape ,Sidney Mintz, Sweetness and Power: The Place of Sugar in Modern History  M. Kulansky,  Salt: A World History.